What Gold Coins Should I Buy?

When choosing between different gold coins to purchase we are left with many options. This guide will focus on which gold coins are the better purchase for you and why. We will explore the different premiums, the ease of selling them, and what technologies they employ to prevent counterfeit productions.

Coins Vs. Rounds and Bullion Bars

While coins (government issued) come with a higher premium, the assurance of authenticity associated with them makes them a better investment. Counterfeit bullion bars and rounds are common on sites like wish.com. Since coins have a face value and are noted as legal tender; counterfeit production, and distribution of coins is against the law as seen here by the Canada Justice Laws website, regarding counterfeit currency. Bullion from private mints does not receive this protection, as the bars sold on websites like wish.com can be viewed as replica or novelties, and do not carry legal tender. For a comparison between the RCM gold coin and the RCM 1 oz. gold bar click here. 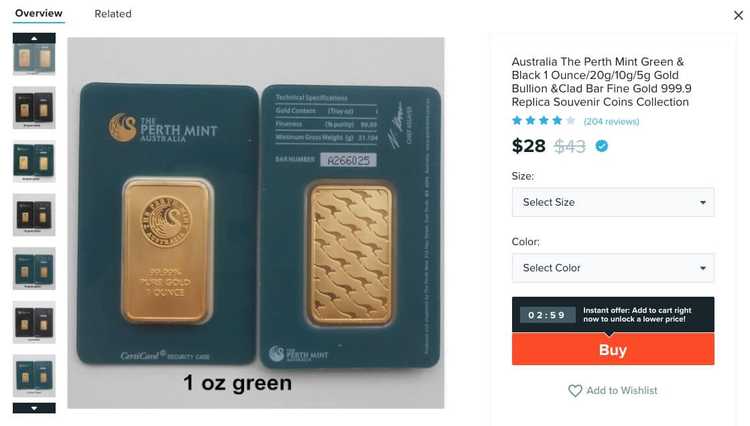 Above: An image of a fake gold Perth Mint bar, which is why gold coins are a safer investment.

Which Gold Coin Should I Buy? 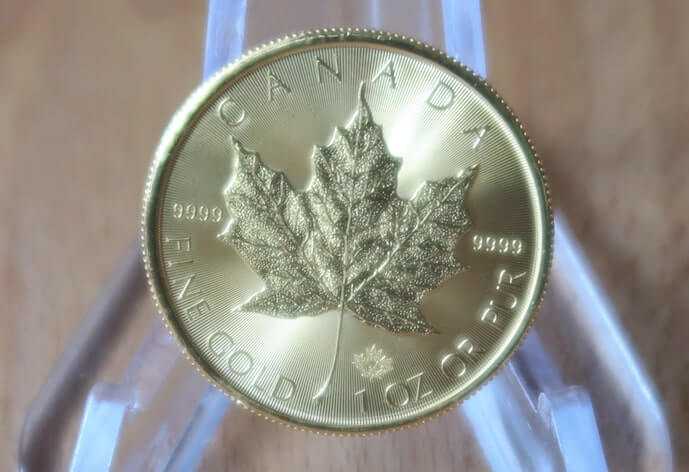 Above: An image of a 2020 Gold Maple Leaf 1 oz. coin. Notice the close radial lines, making it incredibly difficult to counterfeit.

The Royal Canadian Mint Gold Maple Leaf is struck in Ottawa, Canada. This is the only coin of the four reviewed that has anti-counterfeit technology built in, which was given the name BULLION DNA by the RCM. This coin also comes with 99.99% purity; tied with the American Gold Buffalo. Furthermore, it comes in 5 different weights as seen below:

A video of a 2020 Gold Canadian Maple Leaf coin

Since this coin is minted to almost a million on an annual basis the Royal Canadian Mint is able to produce them with a very low premium attached. This makes them the cheapest gold coin to buy in either the United States or Canada. One complaint noted about the coin is due to its high purity, the rims of the coin can become scratched easily in tubes as noted here.

The American Buffalo Gold Coin (link is to the more expensive proof version) is struck in the US Mint, and only comes in a one troy ounce size. This is one of the most highly coveted gold coins for both collectors and stackers. The mintage is significantly lower than both the RCM Gold Maple Leaf, and its American counter-part the American Gold Eagle with mintages for 2019 at 61,000. This coin does not have any anti-counterfeit measures, and there have been slabbed counterfeits as seen below:

Above: A fake American Gold Buffalo in a fake NGC slab.

The American Gold Buffalo comes in 99.99% purity and is a great choice for your first gold purchase. This coin was introduced in 2006 to compete with high purity gold coins like the Canadian Maple Leaf.

Having been in production since 1986 and producing more than 215,000 in 2019, its demand has been quite strong for several reasons. First, it is easily recognizable and, like the Gold Maple Leaf, also comes in several size variations as seen below:

Furthermore, the American Gold Eagle, is not pure gold; rather 22k or 91.67% pure gold. Pure gold coins are more likely to scratch on surfaces and even dent if dropped. The mixture of other alloys in the American Gold Eagle allows for a sturdier coin that can be fondled and admired without the worry of abrasions damaging the coin. This lack of purity comes with a cost; Nothing is as beautiful as pure gold. Now might not be a great time (or a great time depending on how you look at it...) to purchase this coin as a redesign to the reverse is coming in 2021 which will include anti-counterfeit measures.

A video taking a closer look at the Mexican Gold Libertad.

Minted by La Casa de Moneda de Mexico; the oldest mint in the Americas. The purity of the gold Libertad is 99.9% pure; slightly less than both the Gold Maple Leaf, and Gold American Buffalo. It has been in production from 1981-present and features the Mexican Coat of Arms on the Obverse and the Angel of Independence on the reverse of the coin. It comes in similar sizes to the gold Maple Leaf ranging from 1 oz. to 1/20 oz. However, the mintage of this coin is incredibly low. In 2019, only 2,000 uncirculated gold coins were minted, making them rare and highly collectible. Many argue that gold Libertad has the best overall design and significance; representing their historical independence. This coin features no counterfeit measures, but it can easily be distinguished from counterfeits by its absolutely stunning shine and finish.

A video taking a closer look at the 2020 Chinese Gold Panda.

For those interested in a coin that issues a new reverse every year, the Chinese Gold Panda tops the list for its high collectability, and unique designs. However, expect a much higher premium, and remember that the coin is released in 30-gram versions meaning you lose out on 1.11 grams. The Chinese Gold Panda does appreciate in value more than any other gold coin, so they make a good choice for both their rarity and precious metal content. They are released annually in 5 different weights ranging from 30 grams to 1 gram.

The Gold Canadian Maple Leaf is the best gold coin to purchase for North and Central Americans. The gold Maple Leaf comes with anti-counterfeit measures. It's Easy to verify its authenticity through its radial lines and has a high purity of 99.99%. Furthermore, it is easy to liquidate through private and online sales. Most importantly, it has the cheapest premium over spot compared to the other 3 gold coins, making it the clear winner.

In a close second would be the American Gold Eagle, which has lowest premium after the gold Maple Leaf and is also easy to liquidate. Most Americans who are not overly concerned about purity may find this coin a more viable option than the gold Maple Leaf, as they might be able to acquire it for a similar price and support coins minted in their country of origin.

For beautiful designs and collectors' pieces, the American Gold Buffalo, Mexican Libertads and Chinese Gold Pandas are all viable choices but be prepared to pay higher premiums and expect to face more difficulties selling them in private markets, especially the Mexican Libertard.